To share your memory on the wall of Gloria Ferguson, sign in using one of the following options:

As a child, Gloria was brought up with Christian values in the Liberty Hill Missionary Baptist Church, a place she always referred to as the family home church. She would always come back for Family and Friends Day and various other celebrations.

Gloria was a graduate of the Dennis High School Class of 1967, where she was an outstanding basketball player and excelled in other activities. Gloria was an active member of Greater St Luke Baptist Church in Columbis, SC. Faithful in her commitment to God and her church, she served in many capacities. She served for many years as the Chairperson of the Scholarship Committee, Treasurer of the Missionary Ministry, Women's Ministry, and the Family of Benjamin Ministry.

Gloria was a servant of God and she worked until her last breath. She worked as a Counselor for SCDC from 1971-1976. In June of 1976 she became a Special Service Coordinator for the Drug Response Operation Division, a capacity he served until June 1979. From 1979 until her retirement in 2008, Gloria served as a Counselor and Office Coordinator for the SC Vocational Rehabilitation Department where she received the 2000 Statewide Facilities Case of the Year Award. She was a member of the SC Vocation Rehabilitation Association as well as a member of the SC Professional Staff Association.

She was the Treasurer of the Barhamville Real Estate Association, active member of the Delta Sigma Theta Sorority Inc., and a member of the NAACP.

Gloria obtained her Funeral Director's license in 2014, and carried on the legacy left by her grandfather.
Gloria always showed a humble compassion when helping the families of Lee and surrounding counties and showed strength when having to serve many of her own family members.

To send flowers to the family or plant a tree in memory of Gloria Ferguson (Simon), please visit our Heartfelt Sympathies Store.

We encourage you to share your most beloved memories of Gloria here, so that the family and other loved ones can always see it. You can upload cherished photographs, or share your favorite stories, and can even comment on those shared by others.

Posted Sep 24, 2020 at 12:49pm
My sincerest condolences to the Ferguson family. May God strengthen and keep you in His comfort and care. Gloria and I worked together at Greater St. Luke Baptist Church, but we were friends for life. She had such a beautiful smile and spirit!

Posted Sep 13, 2020 at 12:55pm
What a tremendous lady, Gloria exemplified dignity, Grace, class and beauty both outwardly and inwardly. Truly a virtuous woman who used her God given talents, gifts and resources to make this world a better place for all humanity. I am certainly going to miss you, my Sister.
Comment Share
Share via:
C

Posted Sep 12, 2020 at 01:27pm
My deepest sympathy and condolences to the family. Keeping you in my thoughts and prayers. May God give you comfort, strength and peace during this difficult time. I will miss her presence and beautiful smile at Greater St Luke Baptist Church. Rest in peace my Sister in Christ!


When I think of my every encounter with Gloria, I remember her ever present beautiful smile and gracious welcoming countenance.
She will be missed!
Gwendolyn Bradley Willemann
Comment Share
Share via:
RM

Our heartfelt Condolences and Sympathy in the Loss of your wife, Mother and grandmother.
As your love one has made Her transition from this earth to rewards, Always remember the good times you had together.
Your friend and neighbor.
Deacon Ralph & Mrs. Ruth McCarthy
3000 Jaydeen Court
Columbia, SC 29204
Comment Share
Share via: 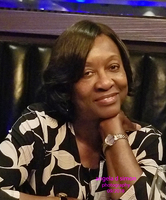